Electric fields in nature and in the human organism

Electric potentials are found everywhere in nature and as a physical force influence various natural phenomena – from the discharge of the atmosphere, auroras, the formation of clouds, waterfalls to the shape of snowflakes. Biological organisms can generate electric potentials, such as the electric eel (Electrophorus electricus) or they serve them as electromagnetic fields of orientation of, such as in migratory birds and bats.

In human electrophysiology, it has long been known that electric currents control, for example, cardiac activity; they further enable signal processing of the sensory organs, such as in the hair cells of the ear or the photosensitive cells of the eye; and they are fundamental to brain function and nerve action potentials. This long-known electrophysiology is the basis of all known electromedical stimulation procedures, from transcutaneous electrical nerve stimulation (TENS) to cardiac pacemakers, defibrillators or even the latest procedures for the therapy of Parkinson’s disease or depression (deep brain stimulation – DBS).

Previous electromedical stimulation methods for pain therapy almost all address the activity of the action potentials of peripheral nociceptors (pain receptors). The aim is to use the highest possible currents and/or frequencies to alter the perception of pain.

These procedures include transcutaneous electrical nerve stimulation (TENS), percutaneous stimulation (e.g., electroacupuncture), or surgical implantation of devices such as peripheral nerve stimulators (PNS), spinal cord stimulators (SCS), or dorsal root ganglion (DRG) stimulators. All these electrical stimulation devices work similarly and use the same electrophysiological principle. Dynamic, pulsed bipolar electrical stimuli (1-70 V, 1-90 mA, 1-1200 Hz, pulse width of 0.2-250 ms) are used to “overdrive” neurons so that they no longer generate action potentials, thereby interrupting the conduction of stimuli in pain states. These electrical devices are widely used and clinically established, although their clinical efficacy is often not clearly established, the treatment is aimed only at pain suppression, and there is no clinical claim or evidence that these TENS or TENS-like procedures improve regeneration or healing of abnormally altered tissues (e.g., inflammation or structural defects such as muscle or tendon tears).

Another class of electrostimulation devices is aimed at thermal or non-thermal therapy. Here we should mention electrochemical ablation (percutaneous thermocoagulation or electrolysis) to reduce pressure on a nerve (e.g., in the case of a herniated disc), to interrupt nociception, or to promote consequent tissue repair.

Electrophysiological phenomena, however, are not limited to action potentials which can be modified by the above-mentioned forms of treatment. Recent scientific findings show that, in addition to action potentials, tissue-specific cellular and so-called transepithelial potentials play an essential role in the healing process: 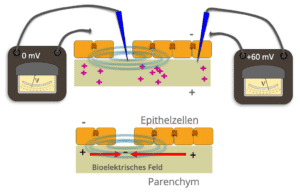 Charged ions and proteins / peptides are found both in the extracellular matrix and intracellularly. Ion channels and ion transporters in the cell membrane regulate the flow of these charged molecules. Each tissue thus generates electric ion currents and electric fields that have a defined orientation and intensity. These electric fields in turn interact with charged ions and peptides through electrostatic forces, electrophoresis and electroosmosis. For example, inflammation of muscle tissue, as seen in painful trigger points, is associated with locally increased concentrations of proinflammatory cytokines, H+ ions, and consequent acidosis, which in turn leads to increased electrical conductivity of the inflamed tissue.

In epithelial tissues, palisaded epithelial cells often generate a net influx of Na+ ions toward the parenchyma. Epithelial layers are comparable to multiple parallel-connected microbatteries in terms of their electrical properties. Epithelial cells are connected to each other by so-called “tight junctions”, which have an electrically insulating effect. This maintains a potential difference between the inner parenchyma and the outer structures.

Such transpethelial potentials can be measured in the skin, fascia, or organ epithelial layers. There they are involved, for example, in the absorption activity of the intestinal wall, the filtering activity of the kidney and, of particular interest here, in the wound healing and regeneration of entire organs.

Thus, when epithelial wounds destroy the tight junctions and also produce local edema (water retention), there is a local breakdown of electrical resistance in the area of a wound and thus a short circuit of the transpithelial potential. Depending on the size and location of the wound, as well as the species and type of tissue injured, electric fields of the order of 140 mV/ mm are generated. A large body of recent basic science work has investigated the importance of these electric fields in cell control. Thus, these biological electric fields stimulate the migration of inflammatory cells, epithelial cells and fibroblasts. Depending on the orientation and intensity of the electric fields, fibroblasts migrate toward or away from the wound. This causes the wound to open or close. New clinical applications in the field of in vitro tissue engineering and to promote wound healing have been inspired by this recently acquired electrophysiological knowledge.

In fact, these biological electric fields are now considered by some authors to be fundamental electrical signaling devices for wound healing and tissue regeneration in mammals.

For example, the axolotl (Ambystoma mexicanum) 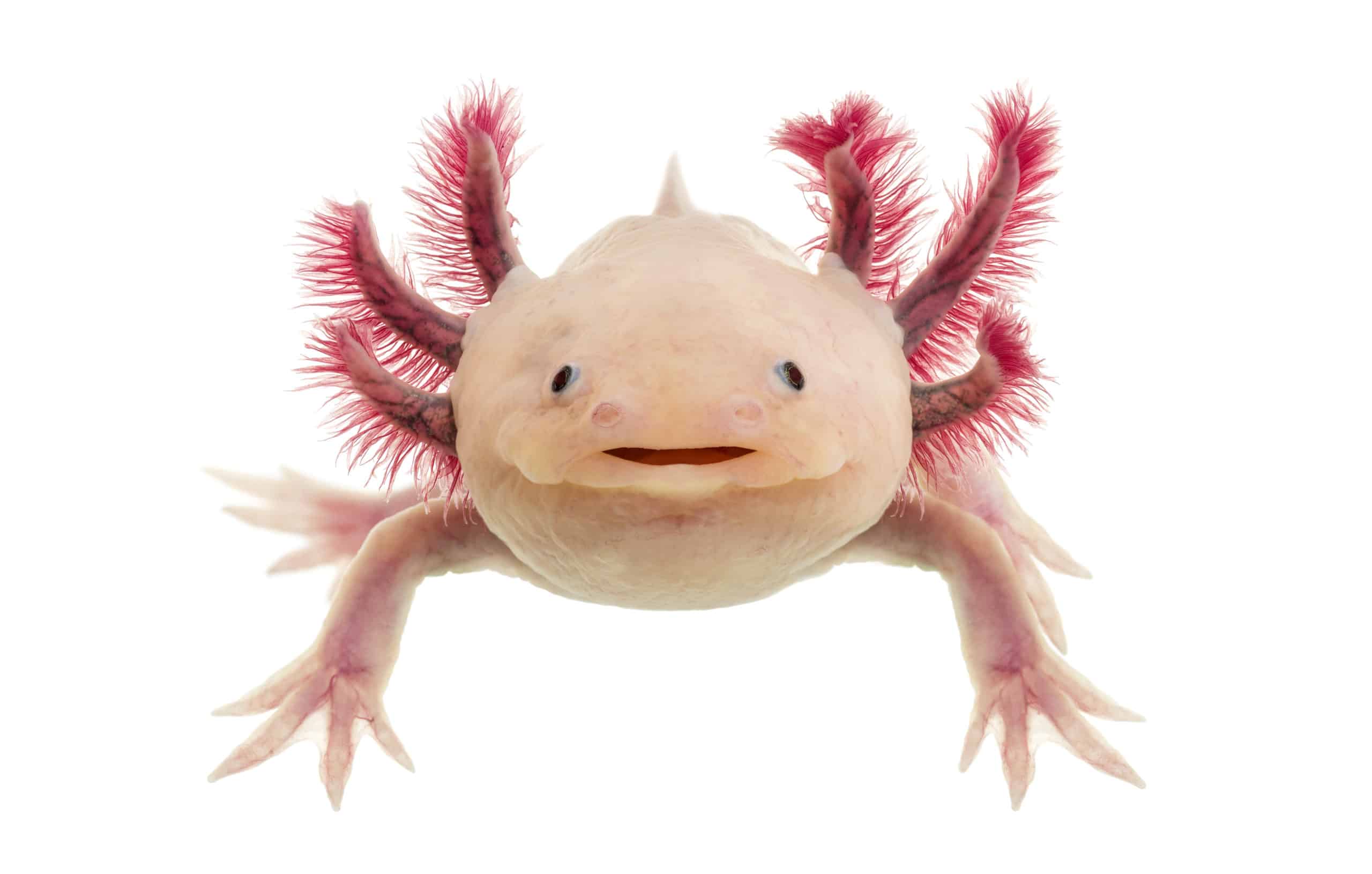 is known to be able to fully recover injured limbs and organs, even parts of the heart and brain, and it generates during the regeneration phase exactly such electric fields described above with a defined orientation and intensity.

Inflammation is mediated at the cellular level by proinflammatory cell hormones, so-called proinflammatory cytokines (including Substance P, bradykinin, TNF-alpha, interleukins). In addition, acidic substances are formed by the breakdown of cell proteins. An acidic environment is created in the area of inflammation, and the pH value drops. Ultimately, these processes break down tissue and sensitize pain receptors. Softening, redness, swelling and the typical inflammatory pain is the result.

In addition to wound healing, cellular and transepithelial potentials also control these inflammatory processes. Thus, according to current knowledge, these potentials are fundamental signal transducers that orchestrate the physiological, precisely timed process of inflammation and healing.

The main field of application of Axomera Therapy (scientific name: Percutaneous Bioelectric Current Stimulation – PBCS) are diseases of the musculoskeletal system, sports medicine, individual, even the most severe neurological pain diseases, as well as seasonal allergy.

In Axomera therapy, an undulating, unipolar, current in the microampere range is generated by a microprocessor and regulated on a patient-specific basis. This current is placed with pinpoint accuracy on the diseased tissue with the aid of fine electrical probes. Here, electric fields adapted for humans are generated in the dimension of cellular and transepithelial potentials, which can be similarly measured during the regeneration phase of the axolotl. With these electrical parameters, Axomera therapy differs from all TENS and TENS-like medical stimulation methods described above.

Diseases of the musculoskeletal system and neurological pain disorders are often based on local non-bacterial inflammation (aseptic) of tendons, ligaments, muscles, joint capsules and nerves. Axomera is used to modulate cellular and transepithelial potentials locally in this pathological tissue in a way that buffers an inflammation-induced acidic pH shift. In addition, there is probably a neutralization of proinflammatory cytokines and thus a desensitization of the nociceptors mediating pain. This is in line with the clinical observation that after Axomera therapy, a decrease in the typical inflammatory parameters – swelling, redness and pain – can already be observed in a period of 60-90 minutes. In addition, the anti-inflammatory component is also a possible explanation for the clinically observed effect in seasonal allergy (eye and nasal symptoms in hay fever).

As explained above, cellular electric fields and transepithelial potentials control wound healing. This results in the directed migration of electrosensitive cells. According to the current literature, modulation of these potentials can influence cell migration of above cells (fibroblasts, epithelial cells, neurocytes, stem cells). The aim of axomere stimulation is to accelerate cell migration and thus the regeneration of pathological tissue or, in the case of chronic diseases, to initiate it in the first place. According to current knowledge, this is the obvious explanation of the clinically observed long-term effect of Axomera therapy.

The (I) buffering of the acidic cellular environment with neutralization of proinflammatory cytokines, and the (II) Modification of the migration of electrosensitive cells -distinguishes the Axomera therapy also clinically fundamentally from all electrical stimulation methods known to us so far in medicine.

Due to its completely new therapeutic approach, as far as we are aware, the multi-patented Axomera therapy thus opens up a new therapeutic class in conservative medicine and is considered a transformational therapeutic procedure.

Case study
for the regeneration of muscle

A 19-year-old professional soccer player suffered a sharp pain in his right thigh during the second half of the game. The sideline doctor diagnosed a torn muscle fiber, which was confirmed in the MRI, and he predicted at least three months of missed play due to the size of the injury. 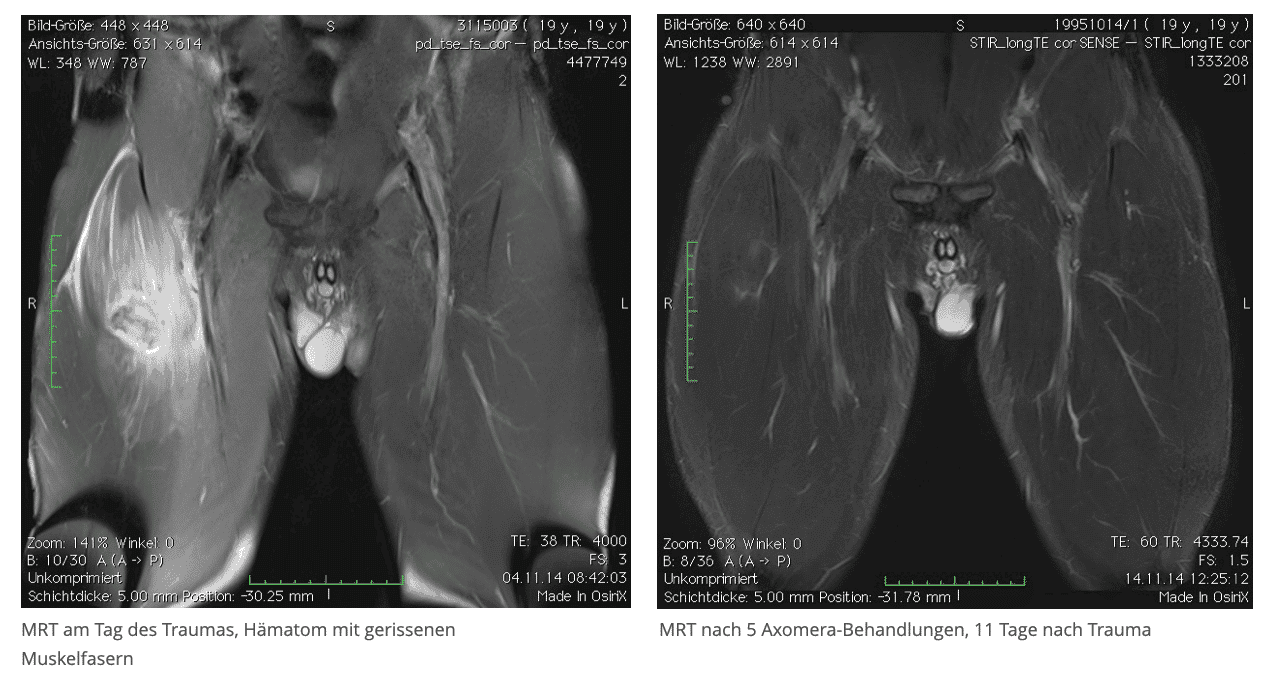 The player received five Axomera therapies over the next 10 days. After the second treatment, the discomfort subsided, and after the 4th treatment, he was able to bear weight without pain.

Axomera® therapy is a novel treatment method developed on the basis of established methods. Therefore the Axomera®therapy is not sufficiently scientifically validated according to the principles of evidence-based medicine. In particular, no high quality randomized controlled trial exists yet. A success of a Axomera®-therapy can therefore not be guaranteed in every treatment case. However, there are quite a number of impressive patient reports, case histories and testimonials on diseases associated with the Axomera-therapy have been successfully treated: You can find them here: www.neueschmerztherapie.de